Add a night of Japanese culture to your Hakkoda snow trip without adding any extra nights to your trip.

The Nebuta or Neputa Matsuri Festival runs for only one week in August with a series of events held throughout the Aomori region where Hakkoda is lcoated. But, the Hoshino Resorts Aomoriya has replicated this authentic festival for you to experience at any time of the year. Japanese peolpe travel from all over Japan to experience it.

On your last day on the snow at Hokkoda

Spend your last night in Japan at Hoshino Resorts Aomoriya

The Neputa Matsuri Festival will begin as soon as you enter the hotel & the theme will be carried throught your entire stay. It is not just a few hours of entertainment.

You will be served some hot apple juice made from local apples on arrival. Aomori is famouse for Apples!

Enjoy a traditional Japapanese dinner before the evening show.

The Michinoku Matsuriya Show during your dinner

The puplic space is decorated just like the real "Matsuri" festival.

Have a nice sleep in the confortable room.

On the day you fly out from Japan

Breakfast at the Nore Sore Syokudo restaurant. It is a buffet style. They will dish up your rice and Miso soup for you!

The map of the whole resort. Enjoy the fresh morning walk after breakfast.

There are traditional buildings which you can also have a look inside.

Please This email address is being protected from spambots. You need JavaScript enabled to view it. to book.

These beautiful icefalls are located only within an hour from Hakkoda. It would be a rare experience to see this beautiful icefall while you have the outdoor Onsen, which you can have at Hoshino Resorts Oirase Keiryu Hotel.

On your last day on the snow at Hokkoda

Spend your last in Japan at Hoshino Resorts Aomoriya

Check in at the luxury Oirase Keiryu Hotel.

Go on an icefall night tour and wath the amazing icefalls which would be ligeted up beautifully.

The peaceful Outdoor Onsen. (There will be icefall at the outdoor Onsen in the 2018 winter!)

On the day you fly out from Japan

Please This email address is being protected from spambots. You need JavaScript enabled to view it. to book.

The 3 Best Things to do in Aomori-City

Let us introduce the 3 best things to do in Aomori city. If you have some spare time after or before visiting Hakkoda, there are so many fun things you can do in Aomori!

Furukawa Fish Market is central Aomori’s public fish market, and is also known as the Aomori Gyosai Center. Rows of vendors offer all kinds of local seafood and other items. Visitors can use the seafood they buy to make their very own seafood donburi, or nokkedon!

Aomori Nebuta Festival is one of the three largest festivals in the Tohoku region bringing in more than 3 million visitors from across Japan, which is held in central Aomori City between August 2nd through August 7th.

The Nebuta Warasse Museum in Aomori City is a great place to experience the beauty of the Nebuta festival displays even when a festival is not being held. These gigantic displays are truly works of art, and along with the music and sounds within the museum, this is the next best thing to enjoying the displays at an actual festival. And since it is indoors, the displays can be enjoyed at all times of year. Its location next to the Aomori City port makes it both easily accessible, and an easy addition to a travel itinerary.

The A-Factory in the Aomori Port area is a great place to take a stop and do some shopping or grab some food. Located just across from the Nebuta Warasse Museum, and just beneath the Aomori Bay Bridge, it boasts a great location to enjoy some of the best activities and sights in Aomori City.

A-Factory is a cider production facility. Located in Aomori Harbour near the Nebuta Warasse museum, this shopping facility showcases apple juice, apple vinaigrette, and more apple-related snacks produced in the Aomori region. There is a cafe and a lounge downstairs and a restaurant upstairs providing great views of the harbour.

The 3 Best Places to visit in Aomori Region

The city of Hachinohe lies on the southeastern part of Aomori prefecture, facing the Pacific Ocean. It is only a couple of stations away from Shin-Aomori station by Shinkansen (bullet train).

The Mutsu Minato Ekimae morning market is a great place to experience the tastes and atmosphere of “real Japan.” Along with the fresh seafood available throughout the market (which you can have prepared in the market itself), it is also famous for its many “kacha” – a local word referring to the kindly older women who run many of the shops.

How to get there: Mutsu Minato station is about 15 minutes by JR Hachinohe Line from Hachinohe station. The morning market is along the main street just in front of the Mustu Minato Station.

The Hachinohe Shuzo sake brewery dates back to 1775 and uses locally-sourced Aomori organic rice and yeast in their brewing process. The Taisho era buildings and storehouses here are designated as National Tangible Cultural Properties.

How to get there: It is only 5 minutes walk from Mustsu Minato train station. The brewery is open between 10:00 - 16:00 from Monday to Friday (Saturdays also during winter only) 500 yen per person including sake trial

A visit to Japan would not be complete without a stop at an izakaya (a kind of Japanese pub), and the Yatai Village in Hachinohe is a great spot to do just that. The Yatai Village offers many different izakayas to choose from, each with its own unique atmosphere and menu. There’s something for everyone to try!

Hirosaki Castle is a small three-storey fortress, originally built in 1611 by the Tsugaru Clan. This Edo period icon is considered an icon of Hirosaki. The castle is located in Hirosaki Park, a spacious public park of about 0.6 square kilometers.

The castle’s original five-storey keep burnt down in 1627 after being struck by lightning. Rebuilt in 1810, the present three-storey keep is the only one in the Tohoku Region that was not rebuilt in the modern era.

During winter, you can take a ride on the old “Stove train” which has been keeping passengers warm for decades.
The combination of the inner retro atmosphere and outer winter scenery brings a sense of nostalgia that creates a heart warming experience.
The track is a 20.7-km line and about a 45-minute train ride between Tsugaru-Goshogawara Station and Tsugaru-Nakasato Station. 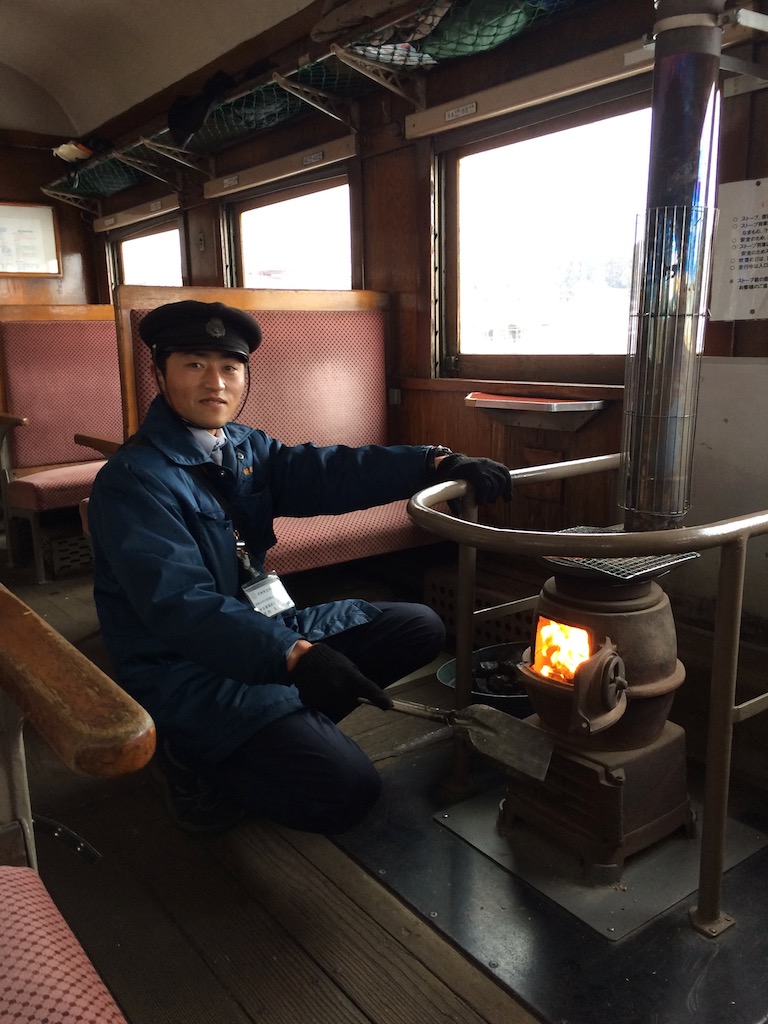